On January 31, 2020, the White House issued a Proclamation expanding application of the 2017 travel ban, adding six countries whose citizens will be restricted from U.S. visa issuance and entry to the U.S. as of February 21, 2020 due to concerns about the six countries’ identity-management and information-sharing deficiencies.

The countries are Eritrea, Kyrgystan, Myanmar (Burma), Nigeria, Sudan and Tanzania, which are specifically impacted as follows: 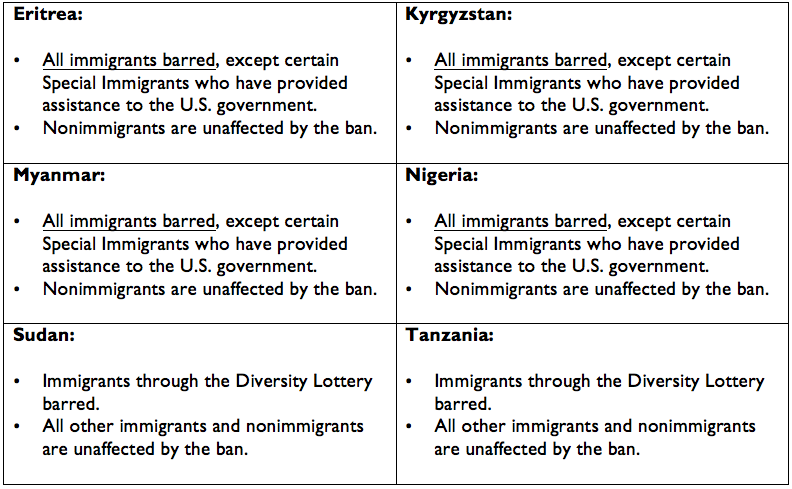 Note that immigrants come to the U.S. to reside as permanent residents (“green card” holders) as immediate family members of U.S. citizens or permanent residents, through employment, or after selection in the Diversity Lottery.  Nonimmigrants, who are not banned under the Proclamation, are those coming to the U.S. for temporary purposes, such as visitors, students, or on temporary work visas, among others.

The new ban’s targeting of immigrants, who are closely scrutinized during a long petitioning process, is extremely concerning.   It will result in harming families and employers in the U.S. who will be deprived of their family members and employees.   For example, in FY 2018, 7,345 Nigerians were issued immigrant visas to join their U.S. citizen and permanent resident immediate family members here.   Another 495 immigrant visas were issued to Nigerians approved to immigrate based on employment.

The Proclamation rationalizes its focus on immigrants by stating they are harder to remove from the U.S. than non-immigrants, but that is inaccurate.  Nonimmigrants can apply for asylum and other forms of relief from removal, just as immigrants can.  And, for example, in FY 2018, while 7922 Nigerians obtained immigrant visas to enter the U.S., 221,819 nonimmigrant Nigerians  entered the U.S.   Given the ban’s stated security rationale, targeting only immigrants makes little sense, and prompts questions about the true motivation behind the ban.

The targeted countries, and critics within the U.S., have begun to push back noting not only the harm to families but also the economic damage that may flow both ways.

The new ban does not apply to individuals from the above countries who already were issued visas before the February 21, 2020 effective date, nor to those who are returning permanent residents or who now have U.S. citizenship and are returning from travels abroad using their U.S. passports, or who have dual citizenship and are traveling with their passports from a non-banned country.  Nor does it apply to refugees and those already granted asylum.